Does it really surprise you?

Okay, but really…how bad can Facebook ads be if nearly 25 million small businesses continue to dish out the dollar bills for their little time in the spotlight? Surely, the ads must have some success. Right? So before pointing fingers at our $29.7 billion net worth youngster for a colossal scam of unsuccessful advertisements in change for massive revenues, we decided to construct a basic survey to gauge the effectiveness of advertising on Facebook.

We released this two-pronged survey to dozens of random Facebook users to evaluate their attitudes towards and response to advertisements on the platform . In short, here’s what the results illustrated: 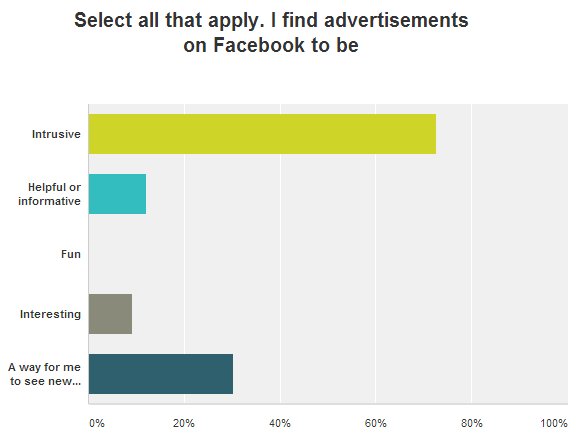 The first concept evaluated by the survey includes the emotions and attitudes of Facebook users towards the advertisements on the social media site. In one question, the study asks respondents to select which words or phrases best describe how they view Facebook ads. “I find advertisements on Facebook to be __________ .”  Out of a range of options from fun and helpful, to a way to learn about new products or services, the majority of users seemed to agree on one adjective to describe Facebook ads: intrusive.

Ouch! Somehow, I can’t imagine that appearing intrusive (synonyms being pushy and invasive) in the eyes of potential clients exactly falls into most companies’ marketing plans. Comments left on this question varied from “annoying” and “not very interesting”, to “I ignore them”, “I use an AdBlocker app”, or “on occasion I will see something new and click on it”. Looks like it’s 1 for Zuckerberg, 0 for businesses advertising on Facebook. But hey, at least some Facebook users felt that the advertisements are helpful or informative (12%), or a way to see more products or services (30%).

In addition to this question, we also asked participants to select how closely they felt Facebook advertisements match their specific interests/needs. 2/3 of the answers fell between “hardly close”, and “moderately close”, with the remaining selections in “not close at all” or “unsure”

The second area of the survey focuses on the actionable aspect of the advertisements. Certainly marketing should encourage some positive reaction or lead from the audience. In this section, participants were asked questions such as:

Facebook advertisements are still right out of the gate as far as promotional and marketing techniques go. That being said, there is not substantial information to support that advertisements (paid or unpaid) on Facebook are effective. Still, a few points can be made about this case:

The good news? Nearly 757 million users are active on Facebook each day (December 2013 statistics). The bad news? People, especially web-surfers, flat out despise advertisements no matter the shape or form, and will do practically anything to remove them from their life. When was the last time you sat through a YouTube advertisement by choice? This can even be seen in this very own survey from one user who discusses their use of AppBlocker.

And this is only scratching surface on the forms of advertising on the platform. Paid media (i.e. advertisements), owned media (content written on the site), and earned media (content that is shared or pushed onto newsfeeds of friends or fans associated with the page), all have very different outcomes and purposes.

The face of marketing is always changing, and this is no exception.

Recent
Why Every Marketer Should Invest In a Camera

Copyrighted images. For content-creators who frequently embed images on web-pages, consider investing in a quality, professional camera. This will prevent…

On Monday, Twitter announced it had enhanced its Ads Editor by adding a new component to its ad structure. Previously,…

Does it really surprise you? In June of 2013, Facebook boasted an astonishing 1 million “currently active” advertisers on the…

In 2013 it felt like I learned something new everyday. Really, ask my team, those poor unfortunate souls had to…

Google+ has become a beloved social media platform among the DrumBEAT Marketing office; some use it to post our informative…